The Methane Rule: where are we now?

As the administration continues rollbacks, some states step up

Last month, House Democrats introduced the Methane Waste and Prevention Act of 2019, a bill designed to restore some of the regulations on methane emissions previously established by the 2016 Methane Rule, which has been effectively repealed by the Trump Administration.

The bill, if passed, would require the Department of the Interior (DOI) to reduce natural gas waste via venting and flaring and reduce methane leaks on public lands. It also calls for more reporting on natural gas production volumes. 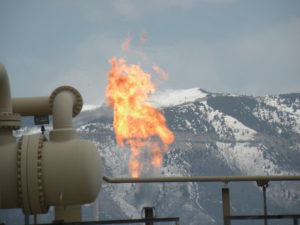 Flaring of unwanted hydrocarbons at a natural gas refinery in the Piceance Basin of Colorado. Photo by Tim Hurst via Flickr.

The original Methane Rule, which Congress failed to rescind through a Congressional Review Act vote in 2017, required oil and gas operators on public lands to use on-the-shelf technologies to capture harmful methane emissions. The rule, which had broad-based support from outdoor industry businesses and even the oil and gas industry, also ensured that valuable public resources are not wasted through flaring and venting, thereby cheating taxpayers of royalty revenues.

In 2018, the Bureau of Land Management (BLM) set forth revisions to the Methane Rule, essentially replacing it with regulations “similar” to those that were in place before the 2016. However, critics say that the pre-2016 regulations allowed an estimated 460 billion cubic feet of leaked gas from 2009 to 2015, enough to supply 6 million households for a year, and thus the new standards are a significant roll back regarding pollution and waste.

As of May 2019, the Environmental Protection Agency (EPA) also seems poised to finish rolling back methane regulations, even as major oil and gas companies pledge to reduce methane and push for more stringent regulations. The EPA’s final methane rollback plan may go to the White House for final review shortly. Last year, several coalitions of environmental, health, and other groups sued the administration to keep them from rolling back the regulations. These lawsuits are ongoing.

While the bill introduced by House Democrats would essentially block and reverse these rollback measures, some states are taking the matter of methane pollution into their own hands. For example, in 2014 Colorado became the first state to implement its own methane regulations. The rules require companies to find and fix methane leaks, and to install technology to capture emissions. More recently, the state passed Senate Bill 181 year which set the wheels in motion for the state Oil and Gas Conservation Commission to begin drafting rules for how much methane developers can vent methane. The state also passed Senate Bill 96, which directs the Air Quality Control Commission to make rules requiring greenhouse gas-emitting entities to publicly report their emissions.

In New Mexico, Governor Michelle Lujan Grisham issued an executive order earlier this year directing the state’s Energy, Minerals and Natural Resources Department and Environment Department to enact methane emission reduction “rules as soon as practicable.” The order also established a task force to develop a plan to reduce greenhouse gas emissions by 45 percent by 2030; the body is set to release its first report this September. However, the absence of federal regulations and the slow-moving state process means current oil and gas production could still have detrimental effects on communities in New Mexico, as cited in a recent letter environmental groups sent to the state BLM, urging a delay of the agency’s planned September oil and gas lease sale.

As the Trump administration continues to direct its agencies to limit methane regulations, it may fall to the states to implement their own rules. Methane emissions are harmful not only to air quality and health, but by extension to outdoor recreation economies around the nation. Communities looking to invest in outdoor recreation as an economic driver face an uphill battle when their air quality is damaged by methane and other forms of pollution. Having state regulations offers communities some surety that their air and public lands can be utilized for recreation and enjoyed by generations to come.

Check out these blogs for previous PLS coverage related to the 2016 Methane Rule: