The San Juan County Commission voted last week to withdraw from a lawsuit over the Trump Administration’s 2017 decision to shrink Bears Ears National Monument by 85 percent. The county was an intervener in the suit, supporting the administration’s action.

The three-member county commission went through a political shift in November 2018, after a federal judge ordered the county to redraw gerrymandered voting districts and two new Navajo members, Kenneth Maryboy and Willie Greyeyes, were elected.

The two new members joined reelected commissioner Bruce Adams, who voted last Tuesday to stay in the lawsuit. Adams argued that any decisions the county makes on Bears Ears should only be done after a public referendum process. But while a public vote concerning the county’s endorsement of the monument may happen in the future, it wasn’t taken last week given concerns about public notification standards. 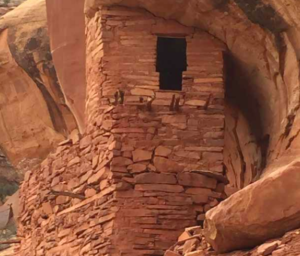 Following the county’s move to withdraw from the lawsuit, the Department of the Interior  released the names of members appointed by DOI to an advisory committee to provide input on the development of a management plan for the reduced monument (despite the “final” plan almost completed). Conspicuously absent from the advisory panel is anyone who championed the monument’s original designation or opposed the reduction.

Members of the advisory committee, which represent 11 interest groups ranging from archeology stakeholders to elected officials, include Commissioner Adams, ranchers, holders of grazing allotments, a representative of the Mule Deer Foundation, and two Navajo members who are monument opponents.

“The public lands involved here would be much better served by a more balanced monument advisory committee. The committee as announced lacks even a single proponent for the monument, while there are many anti-monument critics,” Josh Ewing, executive director of Bluff-based Friends of Cedar Mesa, said in the Salt Lake Tribune. “That means, the BLM and the Forest Service are asking people who don’t think the monument should exist for advice on how to manage it. While those are important voices to be considered, they shouldn’t be the only ones at the table.”

The panel will meet two to four times a year; the date for the first meeting has yet to be set.

To read previous coverage on Bears Ears, see below: