As various federal agencies and businesses begin to assess the damage caused by the longest government shutdown in our nation’s history, impacts on public lands and the people who depend on them are coming to the forefront. 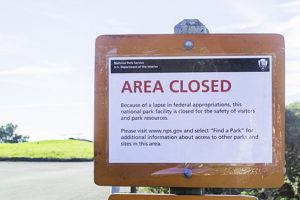 For example, the National Park Service lost an estimated $400,000 per day in entrance fees alone during the 35-day shutdown, totaling a staggering $14 million. In addition, park facilities and lands suffered an unknown amount of damages from human waste, garbage, and misuse; former Park Superintendent Curt Sauer said Joshua Trees destroyed in that National Park could take centuries to recover. On Saturday, January 26 more than 100 local residents held a rally near Joshua Tree National Park to draw attention to the environmental and economic impacts of the shutdown on their community.

“Now is when the real work begins,” Theresa Pierno, president and CEO for the National Parks Conservation Association, said recently. “The damage done to our parks will be felt for weeks, months or even years.”

While the harm done to parks and federal workers is in the foreground, and experts continue to issue conflicting statements on the long-term economic impacts to the entire country, one area that seemingly isn’t being assessed is the impacts on local communites that depend on outdoor recreation and tourism.

Uncertainty as to the status of public lands held back visitors who otherwise may have made plans to travel to parks and other outdoor destinations. Outfitters saw a marked decrease in bookings and towns that depend on outdoor recreation were put in danger.

Businesses at Crater Lake, Oregon, close to Crater Lake National Park and the Rogue River-Siskiyou National Forest, saw traffic at local stores, restaurants, and lodges slow down. Other local businesses also had to deal with visitors stopping to use their restroom facilities, as those within the park and forest were not being maintained.

Julius Cathcart, manager of Beckie’s Restaurant in Crater Lake, told local station KDRV, “As soon as the fires were over, we picked right back up. We were busy all the way until this happened, you know. Then on nice days like today, like I said before, we usually have a lot more traffic. We just don’t have it.”

As assessments of shutdown impacts continue throughout parks and other sectors, and as the three-week deadline to reach a permanent funding deal looms, many local communites are wondering if the worst is over—or if it’s just beginning.