The Senate is reviving its efforts to reauthorize the Land and Water Conservation Fund (LWCF), which expired in September 2018 after Congress failed to pass legislation to fund it.

A broad public lands package introduced last Congress, which includes permanent reauthorization for LWCF, was revived this week under Rule 14, which allows lawmakers to bring bills to the floor without first going through the committee process. 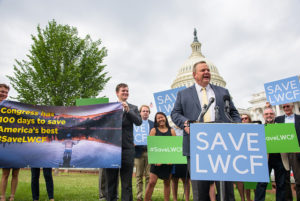 The lands package bill, S. 47, was one of several efforts to fund and reauthorize LWCF that failed last year.

Sen. Lisa Murkowski (R-Alaska) and Maria Cantwell (D-Wash.) issued a joint statement, saying, “While we are disappointed that this package could not pass last year, we remain committed to its provisions and the spirit of our bicameral agreement. The vast majority of bills in this package have been considered through the regular order process and have strong support from members of both parties. States and communities throughout the west, in particular, are counting on us to work together to pass them into law.”

Meanwhile, on the House side, new Natural Resources Chairman Rep. Raul Grijalva (D-Ariz.) has said he plans to introduce a bill to permanently reauthorize the fund early in 2019. When precisely that legislation will come forward remains to be determined.

Read our coverage about previous efforts to reauthorize and fund LWCF here, here, and here.