Jared Polis gave his first remarks as governor-elect of Colorado at the Outdoor Retailer Winter Market last week, promising to protect the state’s public lands, which provide 229,000 jobs and $2 billion a year in state and local taxes. 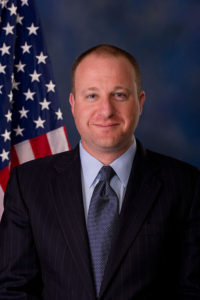 “I will very much take seriously my responsibility to be a faithful steward of our outdoor resources as well as an evangelist for growth of the outdoor tourism and recreation economy,” Polis said at Outdoor Retailer.

Polis, who has served in Congress as a Democrat since 2009, defeated Republican Walter Stapleton, Colorado’s state treasurer. He will succeed Democratic Governor John Hickenlooper, who ran up against term limits.

Also last week, Polis named Sarah Shrader and Ken Gart, both proponents of the outdoor recreation economy, to his transition team. Shrader owns Bonsai Design in Grand Junction, Colo., which designs and builds zip lines and ropes courses. Gart is one of the owners of Powderhorn Mountain Resort, just outside Grand Junction.

The governor-elect also campaigned with an emphasis on renewable energy, with a platform that includes bringing the state to 100% renewables by 2040.

Governor-elect Polis’s win last week comes at a good time for the outdoor recreation economy which looks to continue booming into 2019.