Last week, Public Land Solutions (PLS) and a group of local elected officials from three states met with Department of the Interior staff, US Senators and Representatives, and national press outlets to discuss how their local communities have prospered by using recreation as an economic driver. 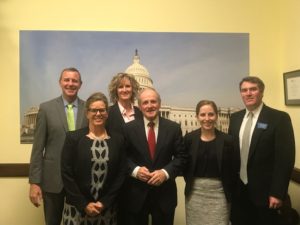 Fruita, Colorado mayor (pro tem) Lori Buck, Twin Falls, Idaho Mayor Shawn Barigar, and Montana State Representative Zac Perry met with Interior Department officials and members of Congress for two days to discuss the importance of recreation on public lands as an economic driver, and to support the Land and Water Conservation Fund (LWCF), a crucial piece of conservation and recreation legislation that is set to expire in late September and faces massive cuts in the president’s current budget. Interior Secretary Ryan Zinke’s recent order on recreation was also a topic, with DOI officials and Congressional representatives hopeful that the order will open up opportunities for investments in recreation.

The trip successfully impressed upon policy makers the growing support for the recreation economy and the LWCF, including meetings with Rick May (DOI’s new senior national advisor to the secretary for recreation); Robin Hawks (Bureau of Land Management); Senators Tester, Daines, Gardner, Crapo, and Risch; US Representatives Tipton, Simpson, and Gianforte, and national press outlets Politico, The Washington Post and E&E News. 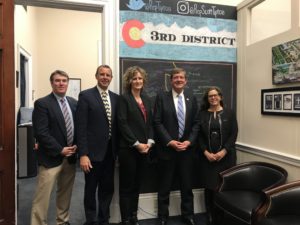 “The personal stories told by our elected officials were extremely powerful,” said PLS Program Manager Katie Ross. “These are places that have seen and continue to see direct economic benefits from recreation, and to be able to tell their Congressional representatives how important the protection of public lands recreation is to their local economies, that it makes a big impact.”

Indeed, Fruita, Colorado Mayor Buck cited the study done by Colorado Mesa University which showed that three bike trail systems in the area bring in an estimated $14.6 million to Mesa County every year. Montana State Representative Perry stated that roughly 75 percent of fishing access sites in Montana have been secured through LWCF funding. And Mayor Barigar cited his community’s success in recruiting major companies like Chobani and in particular, Clif Bar, based on Twin Fall’s quality of life and outdoor recreation.

With outdoor recreation growing faster than ever, the support of local, state, and federal elected officials is essential for the continued success of many communities that are investing in recreation. Legislation like LWCF is also crucial to the growth of the recreation economy and to local communities who depend on it for recreation access.

You can read more about the efforts to permanently reauthorize LWCF here. For an example of the use of LWCF funds, see this PLS comment letter. For a recap of one of PLS’s previous trip to DC, see this blog.