On Tuesday, February 12 the Senate voted 98-2 to pass what some are calling the biggest conservation legislation in a decade, ensuring protections for millions of acres of land and hundreds of miles of rivers. The bipartisan package also established four new national monuments honoring historical figures, including Civil War soldiers and a civil rights icon. 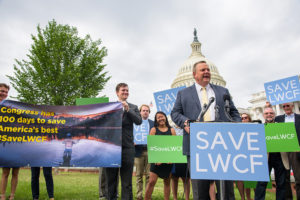 The measure, which included more than 100 individual pieces of legislation, also permanently reauthorized the Land and Water Conservation Fund (LWCF), which was allowed to expire in September of last year.  The decades-old fund allows a portion of offshore drilling royalties to be appropriated for conservation and recreation projects throughout the country.

“This is not only lands. This is water, this is sportsmen, this is conservation. This is about developing local economies,” Sen. Lisa Murkowski (R-Alaska), who co-introduced the bill with Sen. Maria Cantwell (D-Wash.), said during a press conference following the vote. “This is about who we are as a country.”

The package also includes 1.3 million acres of wilderness and permanently withdraws more than 370,000 acres near two national parks from mining claims. The bill will now head to the House for approval; the lower chamber is poised to take up the package after a recess next week.

Read our previous update on this Senate package here; and read past LWCF coverage here, here, here, and here.