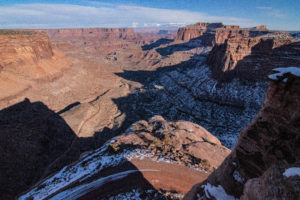 Grand County and the cities of Moab and Castle Valley also weighed in on the debate, passing a joint resolution asking the National Park Service to reconsider the recent directive.

The memo, issued by the National Park Service’s acting regional director Kate Hammond, instructed Utah superintendents to align their regulations with Utah law, which allows off-road vehicles to travel state and county roads as long as they are equipped with standard safety equipment and are registered and insured.

Under the new policy, off-road vehicles would be allowed on any park road that allows cars and trucks, including backcountry routes. However, businesses and other groups have voiced concerns that the change in regulations could result in illegal cross-country travel, exacerbate overcrowding problems, and lead to user conflicts.

In the letter, the businesses write,

In our National Parks, we are working hard to manage the existing overcrowding and to provide experiences inside the parks, which is consistent with the recreation assets that the parks provide…. Through this work, we have virtually eliminated conflicts between motorized and non-motorized visitors by working with our local BLM office in designating biking, hiking, and motorized routes that ensure each visitor is going to have an amazing experience without detracting from the experiences of other visitors.

According to a press release issued by the Department of the Interior in May, visitors to national parks contributed $40 billion to the U.S. economy and supported 32,000 jobs. The report quoted in the release, the annual National Park Service report, showed that, in 2018 more than 318 million park visitors spend $20.2 billion in communities within a 60-mile radius of a national park. Allowing off road vehicles in parks could degrade the user experience and endanger the economic contributions of the parks.