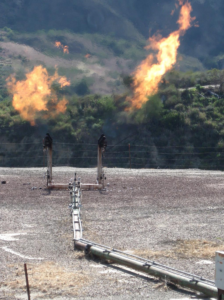 In a big win for public lands and taxpayers, the U.S. Senate narrowly voted to preserve an Obama-era Bureau of Land Management rule that replaces a 35-year old rule and regulates the flaring and venting of methane gas on public lands. The vote, which considered whether to use the Congressional Review Act to kill the existing rule, failed by a vote of 49-51.

Republican Senators Lindsay Graham (SC), Susan Collins (ME), and John McCain (AZ) joined every Senate Democrat in rejecting the measure. In a statement quoted in The Hill, McCain said he feared passing the measure would prohibit the BLM from issuing improved rules on methane in the future.

The rule requires oil and gas operators on public lands to use on-the-shelf technologies to capture harmful methane emissions. The rule, supported by Taxpayers for Common Sense, also ensures that valuable public resource are not wasted through flaring and venting, thereby cheating taxpayers of revenues.

While some in the oil and gas industry attacked the methane rule as unnecessary and harmful to their business, others welcomed the common sense regulation. In fact, an industry representative recently argued in the Denver Post that “regulatory compliance has a vanishingly small influence on economic returns. Indeed, the biggest problem for producers today is not too much regulation, but too much oil and gas coming to market.” See here for more.

Prior to the vote, on the Senate floor New Mexico Senator Tom Udall reasoned that “this is a good, solid rule, and it’s a commonsense rule, and I think it prevents waste just like it was laid out to do. We’re preventing waste, we’re doing job creation, and we’re acting on the part of public health.”

This rare and surprising victory will increase revenues for taxpayers, protect public lands, and create jobs through increased technological opportunities and pipeline maintenance. This huge victory shows that most Americans care about public health and taxpayer responsibility. The recreation community thanks Senators McCain, Graham and Collins for standing up and doing the right thing to protect our public lands.

PublicLandSolutions @PLSorg
Tuesday, July 7th, 2020 at 1:33pm
In the middle of the COVID-19 pandemic, @SecBernhardt is continuing to put Utah's Outdoor Recreation Economy at risk. More from @ProtectNPS' Phil Brueck in @sltrib: https://t.co/yJ2TAW9fcW
View on Twitter
12
14